Lee-Rang has burgundy hair that matches his eyes. His hair is medium length that reaches to the back of his neck and most of the time, he ties his hair into a pony tail at the back. He isn't quite tall but he's definitely taller than most of the girls in the school that he's met so far.

When Lee-Rang encountered his future self, the man in front of him appeared to have shorter hair and wore glasses, also showing that future Lee-Rang is taller.

Lee-Rang is shown to be very carefree and tends to procrastinate a lot. As he works in the chicken shop with Yul-Bi, he would always be late, making Yul-Bi mad. As the story progresses, Lee-Rang's character is shown to change as he takes everything upon his own self. He is willing to do anything, even risk the lives of his future children, just to return the present to normal.

Yun Lee-Rang was suprised by the fact that the principal allowed him to go to a high school since only strong animal gods can go to high school. Yun Lee-Rang happily decided to go to school for two reasons: first, he would become stronger and set time back to save Suh Yul-bi and second, he would be able to experience a new life as a highschooler. Unfortunetly, most high school students are arrogant because of the fact that they are the so-called-chosen-ones and they think they are better than everyone. When Yun Lee-Rang went to school, he was forced to fight the Rat kid or else he wouldn't be able to go into the school. It was set up by Harin and her friends who are the most arrogant people in the school, knowing that Yun Lee-Rang wouldn't be able to beat the rat due to rats having low powered but capable of multiple "Seperate." Fortunately, Yun Lee-Rang made an "Oath" with the rat and was able to get inside the school. Ever since, Harin has been trying to kick Yun Lee-Rang out of the school.

Suh Yul-bi: Yun Lee-Rang actually had a crush on Yul-bi for a long time. Although Yul-bi likes Hong Ryun, Yun Lee-Rang was unable to notice that (until much later on). Yun Lee-Rang has been desperate to save Yul-bi (dead) ever since since she died because of him.

Lee Harin: Lee-Rang started off thinking that Harin was somewhat a girl who looked better off with Hong Ryun but after he found out she was the president and was very rowdy, his opinion changed. Their relationship started off shaky; Harin did not trust him and he was irritated by her boasting. Throughout the series, the two grew closer and even thought along side-by-side. There were times where they even had romantic moments.

Before the final battle, Harin was the first to realize her feelings for Lee-Rang as she ran to help and save him from making a big mistake. Lee-Rang found out how much he had liked Harin from his leap into the future. While there he met his future self, future son and daughter, and future wife, Harin. With that in mind, Lee-Rang made it his duty to protect her.

Even after Harin died, Lee-Rang stopped Hyun Eun-Jo from going further by leaping into the past to stop him. It was the past, the time of when chaos first started that he had sacrificed himself to make the happy ending he saw happen.

When all was done, Lee-Rang was brought back by the contractee of the Red Phoenix. Without looking, Harin and him crashed. She was angry at his blindness but he just smiled and was glad to see her, hinting that he may have regained the memory of the other dimension future.

Hong Ryun: Lee Rang is great friends with Hong Ryun and remains so even after Yulbi's death. However, their relationship grew strained because Hong Ryun insisted that the school was not a safe choice for Lee Rang and did not want to lose another friend. Lee Rang however, chose to ignore his friend's warning. Nonetheless, their friendship is great enough for Hong Ryun to sacrifice himself for Lee-Rang when the Black Turtle penetrated the school.

Ma Yu-sung and Gye Lee-Jin: The 3 of them (the third one being Yun Lee-Rang) were initially known as "The 3 troublemakers". Gye Lee-Jin used to bully Ma Yu-sung, until on one occasion, Yun Lee-Rang cuts them off. This leads to a chain of events ending with the 3 of them getting expelled if they didn't win the annual school's "Ranking Battle". Eventually they became best friends, and both Ma Yu-sung and Gye Lee-Jin play important parts in the story.

On Yun Lee-Rang's 18th birthday, Yul-bi asked Yun Lee-Rang to go do a delivery for him so she can finally tell Hong Ryun about her feelings. Yun Lee-Rang rejects her request at first, but gives in when Yul-bi pleads with him. On his way to the delivery, Yun Lee-Rang was severely beaten up by two high school freshmen and ended up in the hospital that day. Yun Lee-Rang was told by the doctor that he wouldn't be able to use his eyes and legs forever. On that day, the White Tiger grants him his wish of turning back time. When Yun Lee-Rang wakes up, he repeats the same cycle again... for a few hours. When Yun Lee-Rang arrives, Yul-bi asks him to do a delivery for him, and knowing the future, he says no despite how much she pleaded. But unlike the past, Hong Ryun brings a girl from his school, Harin, who Yul-bi thought was his couple and left for her delivery. Later that day, Yul-bi dies due to a mysterious Monster killing her, which was later found out to be the Black Turtle.

Later on, Harin sacrificed herself for Yun Lee-Rang in order to change the future. She uses her last words to tell him it was time for him to go back into his own time. Yun Lee-Rang was then convinced that it was time to go back to when everything started. When Yun Lee-Rang wanted to change back time, he was prepared to accept the price of the wish, and turned back time to his 18th birthday when everything began. He ran into his past self, just like how he did on volume 1 chapter 2, and hid as he bumped into him. Yun Lee-Rang went and fixed all the troubles that happened back there, such as giving Yulbi the courage to ask Ryun out and helping the "rat" from being bullied by "chicken". In the second to last episode, it shows that Yun Lee-Rang was waiting by the port for the Black Turtle to arrive at the end of the episode. In the last episode, it shows that Yun Lee-Rang and the Black Turtle fight each other, and Yun Lee-Rang sacrifices himself in order to defeat the Black Turtle. Lee-Rang's price for turning back time was that he will vanish, and when he's about to vanish, he grabs onto Black Turtle, making both of them vanish instead, having all the sad and happy times, erased from everyone's memories, presumably as well as himself.

On the epilogue, however, it turns out that the white tiger didn't erase Lee-Rang from everyone's memories, as everyone still remembers him, though his body (both the time travelling one and the young Lee-Rang who is about to be beaten up if time doesn't change) vanished since after the fight and presumed dead by his grandfather. On the 10th day after Lee-Rang's final fight with Black Turtle, a boy (whom Lee-Rang saved from becoming collateral damage during that final fight) turns out to be a contractee of the Red Phoenix. The boy's wish was to bring back the person who had gone missing after saving his life, though by bringing that person (Lee-Rang) back, the Red Phoenix has to disappear and won't show up again until the next contractee of the Red Phoenix is born. A final scene shows that Lee-Rang, driving his delivery bike, crashed with Harin (probably deliberately). An angry Harin yells at Lee-Rang, but Lee-Rang just smiled and said that she (Harin) is still "the same as ever". This indicates that Lee-Rang's memory wasn't erased or the Red Phoenix gave it back when bringing Lee-Rang back to life. Lee-Rang then took off his helmet and glass, revealing his face to the now-confused Harin, and greets her, saying "Hey, Harin". 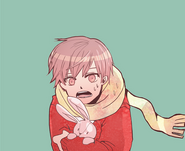 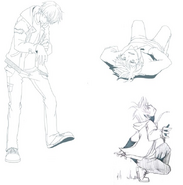 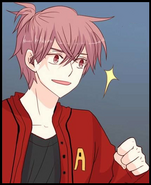 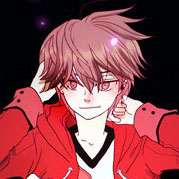 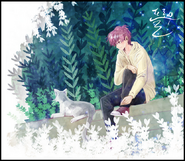 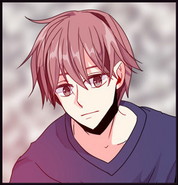 Add a photo to this gallery
Retrieved from "https://the-flow-stream.fandom.com/wiki/Yun_Lee-Rang?oldid=4683"
Community content is available under CC-BY-SA unless otherwise noted.